My essay “Hollywood Muslims in Iraq” was recently published in the Journal of Religion and Popular Culture (29.2). The argument developed from a presentation I first made at the International Conference on Religion & Film in Istanbul (2015). Here is the abstract:

This essay explores how Muslims are represented in the two most successful Iraq War films, American Sniper (2014, US) and The Hurt Locker (2008, US), and offers a comparative analysis of the cultural assertions being deployed in their representation. To do this, I provide a close reading of the films’ depictions within visual, discursive, and sonic fields of production and show how their representations of Muslims signify specific meanings to the audience, which render Muslims distrustful, threatening, and uncivilized, thereby legitimizing specific oppressive treatment and policies toward them.

The essay attempts do to accomplish these goals through 5 sections: 1. Narrative, Myth, and ‘‘Real Life’’ American Heroes; 2. Legible Muslim Images; 3. Savages, Silence, and Language; 4. Islamic Sounds; 5. American Identity, Ambiguous Muslims, and Cinematic Representation. The essay is not open access so if anyone is interested in reading the essay please feel free to Email Me.

One small issue was that I wasn’t able to include any screen shots of the films I was discussing. I argued the Society for Cinema and Media Studies has produced Fair Use guidelines that justify scholarly use of “Film Stills.” After several attempts to get the University of Toronto Press to budge I ultimately failed. So if anyone is interested here are the film images I was planning to use. 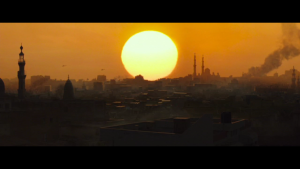 “Techniques for framing specific visual content are imprinted by social power relations that place individual signifiers within the broader mediated image of Islam. …manufactured through repeated marks that structure the landscape of stereotypes, making Muslims legible to the viewer. …public coding determines the limits and possibilities of meaning, but stereotypes largely control their reception and interpretation (88). …the viewer is presented with a war zone that is demarcated as a stereotypical Muslim space. …mosque-centered frames, male dominated social settings, women in dark veils, and kufiya-wearing angry Arabs” (89).

“One of the dominant forms of Muslim interaction with non-Muslims in these films is through forms of violence. Both films foreground their presentations of Iraq as site of perpetual brutality by emphasizing that even the most ‘innocent’ among its citizens can be the perpetuators of treachery. This is signified through the deployment of images of women and children as the executers of guerrilla military tactics” (89).

“​What we find in both of these scenes [read the essay for more] is an image of Muslims that assumes these subjects are shaped by a unique predisposition to violence” (90).

“Another prominent feature of the film [Hurt Locker] is the positioning of Iraqis on the edges of particular high-risk areas, wandering rooftops and peeking through windows. On several occasions the camera will monitor the framed perimeter from the perspective of the bomb squad, encountering individuals for whom we are given no explication of their role in the current situation. These images are contrasted with high-angle shots of the team below from the perspective of unknown actors.

The resultant effect is a continued unease with the presence of any Muslims, whether they are perpetrators or victims. Since the terrorist insurgents are not clearly marked for the characters or audience, ordinary folk in the streets, their homes, or mosques are ultimately deemed willing to enact destruction through strategic violence. The human valence created through the positioning of Iraqis is not simply an ornamental border; it generates the semiotic ambiguity of Muslims that is necessary for the justification of policies and practices that respond to them as highly suspicious and potentially dangerous” (92-3).